[Noblesse oblige is the moral obligation of those of high birth, powerful social position, etc., to act with honor, kindliness, generosity, etc. {French origin; translation: “nobility is an obligation”}] 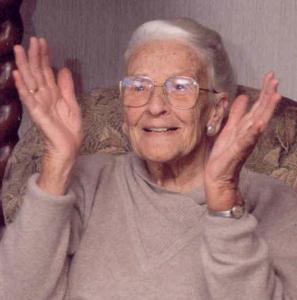 I see her through the window pane of the door, her head slightly drooping. She has the same trouble as I have with my neck. So much pain concentrated in that one point; c1, that little hard bone at the top of the spine. She used to be so straight and just as tall as I am. Yes, I remember that everybody looked up only a few years ago when my grandmother would glide by on her bicycle, stately as a queen, straight as an arrow. It was actually amazing… I mean for her to start cycling again after she had fallen on that patch of ice in front of the church and broke her thigh. At first, I thought that was the end of it….. She started seeing leprechauns at night. Well, you know what time it is then. But no, she recovered miraculously after we organized that show and party for her eightieth birthday when we did that song about the German Fraulein in the mountains. I was dressed up in this crazy-looking dirndl, the Alpine dress with tight bodice and cute, white blouse with puffy sleeves and my cousin wore a huge, fake nose and mustache and lederhosen. Aunt Millie laughed so hard she almost fell off her chair. We also did a rap song about how “cool” our grandmother was, and she loved it so much that she started hugging us and had our make-up all over her face.

Oops, duck….. She’ll see us. It has got to be a surprise! Sssshhhh, she knows I am in the Netherlands, but she doesn’t know that we are right at her back door. She’ll be so happy! Oh, and me too! I would never have thought that I would see her again, but she really is a “tough one;” lived through two world wars. We have this song in Dutch about a really tough cowboy, and she calls herself “the ol’ tough one” after the song. I felt bad that I could not fly over for her 90th birthday or Christmas.

Her eyes are sort of turned inwards now. She doesn’t really seem to see anymore- The blue almost turned to gray. Her eyes are soft now instead of sharp. Her whole body and soul lost the sharp edges; she mellowed a lot. But she will always remain one hell of a lady whether she lives in this little condo, or on the large estate in the mansion where she grew up. Her hair is always done up. She always wears nice dresses – classy, elegant….even on her worst days. That’s when she gets moody, and starts complaining about her sister next door, or that too many ugly houses are being built in the village. She has an opinion about everything. She even collected signatures from neighbors to prevent the little post office from closing down. She subscribes to any church magazine or charity. Oh..and don’t forget the animals! She has saved more stray cats that anybody on the planet! That big, red fuzz ball in the corner behind you is her latest addition.

It is hard to believe that this lady I am now so diligently hiding from is from an era when a class system put her in the upper echelons of society. Here I am, hiding in her minuscule patch of a backyard behind her tiny, two-room condo connected to a hall that leads to the nursing home where she could -if she so chooses- eat dinner with what she disdainfully calls “those old people.” I am not sure if that is a euphemism to my ninety-year-old grandmother for “common, old people” or not. Of course, I am one of those commoners…… The blue blood that runs through her veins somehow got watered down significantly, and by the time it reached my veins it had turned red. I am a struggling immigrant in the USA, and although I am all for the “power of the people,” when I am tired of fighting, I am sometimes nostalgic for a time when things were clearer, more defined, and more stable. In this rapidly changing world of technology and terrorism, where I sometimes fail to recognize where I am or who I am anymore, it is so very comforting to stand here and look at my grandmother, Oma Heuvelink-Heckhausen. She cannot be accused of being “old-fashioned.” In fact, when my sister wanted clothes that were “too modern” for my mother, she would ask “oma” to come along to town with us to go shopping because she would convince our mother to buy that fashionable item, or those trendy shoes. Despite this, my grandmother did like the classics – We were united in our love of High Teas and sappy movies; when I still lived here, we used to spend many hours each week together swooning over this movie star or that dramatic plot – We’d sing “Edelweis, edelweissss…..yaaa-ti-ta-ti-ta-daah-dah,” while a man in a funny-looking too tight dark-greenish suit crooned ogling the camera, his eyes as blue as the Danube River, teeth sparkling white as the white flower he sang about on top of the snow-topped Alps. “Such a good face,” my grandmother Von Heckhausen would say, conveniently forgetting that Christopher Plummer usually played horrible Nazi villains in other European movies at that time.

She did not forget her fellow-sufferers, however; during the Second World War, it must have been hard for her to turn against the country of her ancestors, but she was clear about what was right and wrong. She made a very clear choice to help the allied forces, to support the resistance (of which her husband was a prominent member), and to invite the “Tommies” into her home for Christmas, even though she would have preferred the much classier, German Weihnacht celebration with the more reverent carols, Glüwein, and refined decorations to the rowdy songs, beer, and Christmas crackers of the boisterous British soldiers. True to form, she did insert just the slightest little bit of class even into that celebration….. My mother told me that one of the most magical moments in her life was when she saw her parents dance the tango. Sensual and subdued – with a volcano of passion right under the surface, those two completely mismatched adults were only united in their love for the tango, their children, and their garden.

Standing in her tiny garden now about to see her just one last time, I remember her large, glorious garden behind the old house – Not the extensive orchard, stables and estate of her childhood, but still a good size garden coveted by many villagers who enviously called the area where she resided the “Gold Coast.” It was true; she had been fortune enough to be born in a family of means and good breeding, but that also meant that she was obliged not only to carry on, but to do so in style while taking care of those around her — In other words, the gardener has a responsibility to tend to the garden. It was not a question of whether one wanted or not; one was obliged to. Her garden was beautiful….. Paradise lost. It was hidden behind the imposing house. A real house of bricks and mortar, large and firm, three stories high with an attic and a basement, a parlor for polite company, a dining room, enough space for a good size family and a maid –- who coincidentally all (over the years she had a few) adored “ma’am.” Those were Houses -Not the crackerjack boxes she and I are forced to live in now. That solidity is gone. Things have become flimsy. They are not durable, but change with the speed of lightning. Estates are sold off and subdivided, large Houses are gutted and turned into little cells for little lives, and gardens –- not just “yards” or ugly stamp-sized slices of sod, but real gardens with gargantuan trees, shrubs, flower beds, a carpet of green grass have all but disappeared. I still see the old garden with my grandmother picking snowbells at the foot of her old pear tree – Who will bring them to us to announce spring when the cycle of life has ended for her?

Through the window, I see her back turned towards me as she takes something that she just baked out of the little toaster oven because she was not allowed to bring her big oven from the old house. Her kitchen there led straight into her garden, where I had spent every Sunday of my life and many weekdays as well. That is where I was free to play anything I wanted, life was full of possibilities, and the sky was endless.

The hot pie is on the rack ready to be eaten by a grandchild. She turns around, shuffles to her large chair, and sits down. Looking at the TV guide in her lap, she looks down, wondering if they will be able to watch The Sound of Music one more time. Softly, I open the door and sneak in.

She looks up and throws her hands up in surprise. She is speechless, yet she tells me all I need to know; it does not matter that she hasn’t got long on this earth nor that she lost her estate, her husband, her house, and her garden, she is still a lady because Noblesse Oblige.