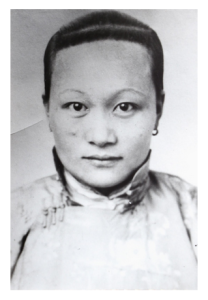 This is the only name I know of my Chinese grandmother.  It simply means grandma.  My brothers and sister and I would get dressed up on a Saturday once or twice a month and make a trip in our white station wagon in what seemed like an eternity for a 6-7 year old. Today I know it as an 85 mile car ride from where we lived in San Jose, CA.  This photo is not what I remember about her.  It was taken when she arrived here from the Canton region.  She was in her early 20’s and had brought two children across the ocean by steamer to be with her husband who had come a few years earlier to get established in Colusa, CA. She would eventually have 8 children with my mother being the 4th eldest.  My mother and my aunties told me that she was a strong woman, quiet and maternal. She took care of the kids with the help of a woman whom we now know as my grandfather’s concubine who came over with him to provide comfort.

I remember being sad every time I saw her. She was always dressed in a drab grey dress with beige hose covering her legs and large black shoes with one buckle pulled across her instep. She often had a grey shawl to cover her shoulders whenever we went outside with her. Her hair was turning grey and her eyes seemed to carry the baggage of sadness I would learn about as an adult.

After her last child was born Po Po withdrew and became despondent unable to quell the pain that no one understood. With the family unable to provide any comfort from the Chinese doctor they turned to Western physicians who despite their attempts were unable to find a cause for her sadness. They eventually diagnosed her as catatonic.  Today we know it as post partum depression. She was committed at the age of 32 to Napa State Hospital where she lived until she was in her late 70s. When the hospital was closed my mother brought her down to San Jose to a skilled nursing facility so she could be close to her. She eventually died in her early 80’s never once having a conversation with us, only a few words in chinese here and there and intermittent smiles when we offered her candy that we had brought or when we pushed her from the stale room she had lived in for most of her life outside to the lawn in the middle of the hospital.  As I write this I feel a deep sadness for not truly knowing her beyond what I have recounted here. There is no connection to Toishan for us. There are no relatives of hers or of my Gon Gon’s ( grandfather) family that we are aware of. We are Hom’s in China and Tom’s in the US. I was told to look in the directory online of the Tom Clan, that I might be surprised by what I may find.

I was once in Chinatown in San Francisco when a very old man stopped me and asked me if I was from Toishan. He spoke in Chinese repeating over and over that he knew Gon Gon and Po Po, that they had grown up in the same village back home. He was emphatic and demonstrative. I did not believe him. I wish I had though I knew very little of my grandparents to make any sort of connections or relationships with him.  Even though I did not really know the trueness of my grandmother, the beauty she possessed and the life she committed to with her children I find some comfort in knowing that part of her calm and strength resides in my mother.

[Hey Rebecca. I woke at 3 am to find your message and promptly wrote this as a free writing exercise unedited. Thank you for the opportunity. Your prompt got me thinking about my roots. -Terry Kim] 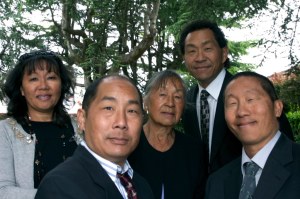