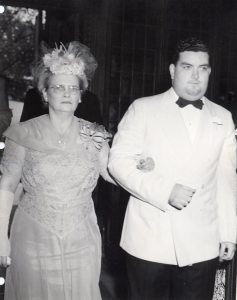 I was fortunate enough to have known both of my grandmothers as I was growing up. I am the youngest of nine children and my parents were in their forties when I was born. Though they were up in years Nana Johnson, and Nana Neagle were a vibrant and colorful part of my childhood. We often visited my mother’s mother, Nana Johnson, on Saturdays in their Manassas, Virginia home, a small farm house she and my grandfather retired to. Nana Johnson did not drive and as my grandfather grew in age it was necessary for us to take the long drive to Manassas for weekly grocery shopping trips or anything else Nana needed. My father’s mother, Nana Neagle, lived a short distance from us with my aunt and uncle in Rockville, MD. Both grandmothers were in and out of our home and we were back and forth in theirs.

Though these two women raised their families close to each other in Washington D.C., they could not have been more different. Nana Johnson wore a dress every single day of her life, and wore her long hair in a bun. Nana Neagle had her hair “done” and for as long as I can remember, she wore the same rhinestone cat eyed glasses, with style.

My Nanas saw and experienced a generation that shaped their spirit and ours. They experienced things I have only read about. They saw horse drawn carriages blur into highways, they fed their families through the great depression, they sent their sons off to war, and they buried their husbands and continued on.

Never had two women been more different in personality, or appearance, and yet they both had fine tuned, the art of, “the look”. “The look” consisted of a strong chin, raised up slightly into the air and a sideways glance of the eye. They did not need to say much. “The look” said it all. “The look” was a nod to an assurance of what you knew deep down inside already. “The look let you know you were deeply loved and they were either proud, or displeased in what you had done, but never in who you were. It gave you an inkling inside, and you knew they were praying or hoping for your future. It summed up every part of your being and confirmed without a doubt, you were part of a family bond that could not be broken. It was “the look” that reminded you of who you were and what the generations before you had given so you could become it. You knew you were part of the hopes and dreams that came before you. It was the expression that conveyed you were part of something bigger than yourself. “The look” encompassed you in a circle, fiercely wound together by, family, faith, Love, and life. I am currently perfecting “the look” and I hope to give it to my own grandchildren one day.